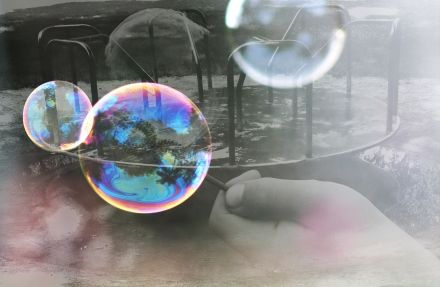 Westerfield Playground is a sad place.

A girl died here. Spun off the merry-go-round, hit a tree, neck buckled like a sippy-straw. She died before the ambulance arrived. Her father cried and screamed, and refused to let the paramedics move her. The whole neighborhood saw it happen.

For months, bouquets and colorful candles surrounded the tree like a skirt. For a while there was a picture, too. The rain kept wearing her face off, though, so they brought a new one that was laminated. They say plastic is forever, but even that shell meant to protect the memory of her smile corroded, and the rain seeped in, bleeding away all of the pigment until the photo was nothing more than a ghost.

Someone eventually tore the laminate off the tree, and then the bouquets and candles disappeared, too.

The little girl’s family moved away, perhaps to settle in some state up north, to put it all behind them. The Home Owners Association got rid of the merry-go-round. They hoped, with the whirling death trap removed, people would use the playground again.

But even after the makeshift shrine disappeared and the playground was relandscaped, the mothers remembered. They made sure their children remembered, too. Quick tugs of a collar when a boy tried to run to the slide, iron grips on the wrists of little girls interested in a daisy patch. Their voices always rained down so harshly, warning their little ones they would end up just like that girl if they played there. Playgrounds aren’t safe, they said. Better to go home and do your homework.

No one has come here for a long time, now. Swings creak under imaginary riders. Rust covers the slide. Leaves rustle against legs that aren’t there, the wind chasing the memory of voices laughing while playing tag in the dusty yard.
I’m always so lonely here.

Today, a toddler tugged her mother into Westerfield. At first, I thought it was just a happy accident. The mother would realize where they were and take the girl somewhere else. But they didn’t leave. Maybe the mother didn’t know. Maybe enough time had passed.

They blew bubbles from plastic wands. For a moment, the playful colors reflecting off of the bubbles brought life—happiness—back to the playground. The toddler giggled, and the freshness of it made my toes curl in bliss.

But then the rainbows faded. The air tensed as the bubble turned grey—ceased. When it popped, the light went out of the toddler’s eyes. I pushed a swing nearby, to entice her to stay, to blow more bubbles. But the toddler rejected the rusty squeak of the swing’s bolts. Maybe they scared her.

She turned to her mother, a soft pout and raised arms communicating all her mother would need to know. The mother pulled her daughter to her breast, the diaper bag of toys bouncing against her tip. “Let’s go home.”

I only wish I could.

It is a cold day in autumn. The wind blows through me with icy fingers, teasing my senses with the whistles and creaks it makes as it rushes through the playground equipment, like an unorganized, off-key school orchestra. I watch the streets, envious of the children with their backpacks as big as turtle shells, heavier than bricks, clutched tight in their hands as they laugh and shriek at each other on their way home from school.

I run back to the slide as they pass me by, tearing up the chute as quickly as my feet can stick, but it isn’t hard; the slide is all rust now. All it’s good for is climbing. The rumble makes a few children look back, but I know all they’re looking for is evidence of a squirrel. I don’t try to be noticed anymore.

The swings are broken. The cement tube is overgrown with weeds—a tomcat has started using it as his bathroom, and I can’t make him leave. The whole yard smells like his urine now. It keeps me up at night.

The merry-go-round squeaks as the wind pushes it a little, even though I’m the only one who can hear it. The first few years, I hated looking at it. It scared me.

But now, since it’s the only thing in this awful place that doesn’t rust or break, it’s my only source of entertainment, so, I suppose it’s not so bad.

I go back to it now, stepping up with one leg as I push with the other. The gears squeak and groan as it speeds up. I leave my tears to the wind as the world becomes a blur.

The voice is right beside me. When I open my eyes, I know exactly who it is, but still, the sight of her makes my heart go cold.

The little girl who died is looking at me, the features of her face as worn away as the rain-damaged photo from the tree. Her body is relaxed on the merry-go-round, arms looped lazily around the metal rails, not even struggling to stay on, despite how fast it spins. “Why are you so angry?” she repeats.

The pressure behind my eyes intensifies as the tears leak in thick, burning trails down my cheeks. “Because they forgot me.”

She reaches out to brush my cheek, though her temperature sends my stomach to my throat. “Who did?”

“Well, that’s not true. You still remember you, right?”

She’s trying to be clever, to cheer me up. But it’s not going to work, because she’s wrong. I don’t remember me. I don’t think she would have remembered herself either, except there was a picture there for a year, reminding her. It makes me angry that she mentions it, and in a moment of aggression, I spit her question venomously back at her.

I regret it, of course. That warped face sags, and her temperature drops even more, frost spreading on the cold metal of the merry-go-round, which suddenly stops spinning.

“You’re mean,” she says, before disappearing, and taking the merry-go-round with her.

I don’t argue the point.

Westerfield Playground is going to be paved over, today.

The slide and swings are already gone, and men in orange vests are cutting down the trees. My eyes are on the backhoe. It belches black smoke as the worker turns on the ignition. They’ve got a chain on the cement tube, and when they start yanking it back, the tomcat bolts.

I sit on a dusty patch of the yard, wondering if I’ll still be here when Westerfield becomes a parking lot, or if my presence will get carried away with all the refuse in the dump truck. I’m kind of hoping for the latter; at least then I’ll be somewhere else. Anywhere but here.

The backhoe screeches as the cement tube finally rolls free, leaving a deep indent in the earth below. I wonder how many worms are wiggling in the dark soil right now. It looks wet and soft.

One of the men moves forward, inspecting the earth, and suddenly, he throws his arms up, yelling at the driver to turn the machine off. He pulls out his walkie-talkie, mumbling into it as others gather.

I stand, curious, and walk towards the crowd.

“What is that?” a man nearby asks, as the one with the walkie-talkie finishes his call and takes off his hat.

All bones now, curled like I’m sleeping, swathed in decomposed fabric and baubles.

“It’s just a little kid,” I hear one of the men breathe.

A few step away from the circle, their eyes closed and mouths covered.

“We gotta call the foreman. The city office,” the man with the walkie talkie says.

“Shit. In a god-damned playground.”

But someone can hear me.

Far behind me, the familiar squeak of bolts and a metal platform come to life. When I look, the bleeding face of the little girl who died on the Westerfield merry-go-round is looking at me.

I turn towards her, and then run.

She extends her hands, accepting me into the hug I need just then.

“I’m sorry,” I cry, clutching her as the wind softly tilts us into a spin, “I’m so sorry.” 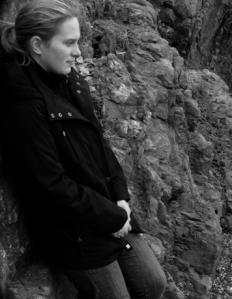 14 thoughts on “Merry-go-Round by Alex Hurst”